Both Genius and Not

Both Flesh and Not by David Foster Wallace 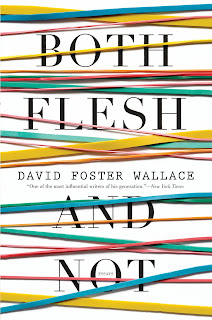 Originally published in The Weekend Australian, November 24-25, 2012
It’s been four years since the American novelist David Foster Wallace took his own life at the age of 46. The Wallace industry has been busier since his death than it ever was while he lived. In 2009 it gave us This is Water, a padded-out version of a graduation address delivered by Wallace in 2005. In 2010 somebody published his undergraduate Philosophy thesis. In 2011 we had his big posthumous novel, the characteristically brilliant but annoying The Pale King. D. T. Max’s biography, Every Love Story is a Ghost Story, came out earlier this year.
Now we have Both Flesh and Not, a compilation of Wallace’s uncollected non-fiction. Mark that word “uncollected.” Wallace published two books of essays during his lifetime: A Supposedly Fun Thing I’ll Never Do Again (1997) and Consider the Lobster (2005). The bulk of this new book consists of early essays that Wallace chose not to reprint in those volumes. In almost every case it isn’t hard to see why. This book is drastically uneven, but then so was Wallace’s entire oeuvre. That was always the conundrum about him. Why was it that the most gifted prose writer of his generation never produced a wholly satisfactory book?
Fans of Wallace’s 1996 novel Infinite Jest will contend, hotly, that he produced at least one. I wish I shared their ability to read that book all the way through. It shouldn’t be hard, in theory, to resist the charms of a novel containing sentences like “My chest bumps like a dryer with shoes in it.” But Wallace, it turned out, had a few theories of his own, and some of them had to do with the supposed undesirability of old-fashioned things like narrative drive and closure. His novel therefore got harder to love as it went on – and it went on for over a thousand pages. It was all brilliance and no structure. It didn’t develop; it just got longer.
Non-fiction was a better forum for Wallace, because it imposed a few useful constraints on his huge but undisciplined talent. When his tireless, frisky intelligence had something solid to apply itself to, the resulting prose could be breathtaking. Riffing on more abstract themes, he had a bad tendency to drift into mannerism and self-indulgence. He could remind you of a stoned guitarist taking a thirty-minute solo. Writing about reality, for magazine editors who at least notionally wanted him to hew to a given word-length, Wallace had a few objective reasons to rein himself in.
This third book of essays isn’t in the same league as the other two. How could it be, when it has been largely cobbled together from their respective reject piles? Still, it has to be said that around a third of the pieces preserved here rank with Wallace’s very best. Unsurprisingly, a couple of these keepers are about tennis. Wallace played the game at rep level as a youngster, and he wrote about it peerlessly. His description of Roger Federer dressed “in the all-white that Wimbledon enjoys getting away with still requiring” is composed with a typically deft flick of the calligraphic wrist. The prose isn’t showing off; it effortlessly catches the shape of the fleeting thought. It gives you the illusion that you’re being talked to, one on one, by an extraordinarily perceptive and intelligent friend.
Writing about a match between Pete Sampras and an 18-year-old Mark Philippoussis, Wallace casually flips on his afterburners. How’s this for a resonant word-sketch? “Sampras, poor-postured and chestless, smiling shyly at the ground, his powder-blue shorts swimming down around his knees, looks a little like a kid wearing his father’s clothes.” Meanwhile, at the court’s far end, “the malevolent but cyborgian Philippoussis hasn’t betrayed anything like an actual facial expression yet.” Between points he likes to “dance a little in place – perhaps to remind himself that he can indeed move if he needs to.”
The eerie thing about Wallace is that he was capable of writing prose as perceptive and funny as that for pages at a stretch. He was like a sausage machine that could churn out endless lengths of fillet mignon. But his prodigious gifts were accompanied by a strange strain of immaturity or petulance. Sometimes, apparently just for the hell of it, he seemed bent on writing whole pages that might have been composed by a person with no talent or taste at all.
Why? Perhaps Wallace drops a hint while discussing Sampras’s habit of losing sets in order to win matches. “You got the impression,” he writes, “that Sampras was sort of adjusting the idle on his game, trying to find the exact level he needed to reach to win.” Wallace was the Sampras or Federer of writing: he could perform brilliantly at will. His problem was deciding when and why he should do so. For tennis players the criterion is straightforward: they need to beat the other guy. But what was Wallace’s purpose or end? What was his game?
Wallace spent an awful lot of time overthinking that question in college writing workshops, first as a student and later as a professor. Clearly he didn’t write merely to be read and enjoyed, or to create shapely works of art. The whole thing had to be much more complicated than that. If it wasn’t, why did you need to go to a university to think about it?
Wallace’s answer, as a fiction writer, was to sign up with the experimentalists. Unlike his contemporary and friend Jonathan Franzen, who has argued that fiction’s proper job is to record the texture and peculiarities of the social here-and-now, Wallace was sceptical about the conventions of social realism. He felt that the really fruitful thing to be interested in was language itself:

[T]here can be seen one deep feature shared by all the cutting-edge fiction that resonates with the post-Hiroshima revolution. That is its … loss of innocence about the language that is its breath and bread.

Imagine thirty straight pages of that and you have “Fictional Futures and the Conspicuously Young”. Originally published when Wallace was twenty-six, the essay is reprinted here in all its gaucheness. You can see why Wallace declined to resurrect the piece in either of his authorised collections. In his mature work, he was way too hip and ironic to risk such earnest cadences. But here he is using phrases like “cutting-edge fiction” with a perfectly straight face. Wallace’s theories about his wider mission as a writer never stopped reeking of the undergraduate workshop. The theme brought out the worst in him: it made him lose touch with his sense of irony at precisely the moment when he needed it most.
If only Wallace did things the other way round: if only he'd been more sceptical about literary theory, and less sceptical about the usefulness of simple readability. If only he wrote fiction that was as full of light and air as his best essays. Far from rendering his fiction more “fertile” and “forward-looking,” his hyperawareness of technique only served to hobble his great talent. We know now that he came to find fiction-writing almost intolerable towards the end of his life. He talked about giving up and running a dog shelter instead. He had become, as Franzen has phrased it, “bored with his old tricks.”
But it would be wrong to end any discussion of Wallace on a note of complaint. After all, one’s impatience with his worst habits is a function of one's awed affection for what the man could do at his best. Loving his work can be an exhausting business, but it can be exhilarating too. If you don’t know Wallace already, start with the title essay of his first collection, "A Supposedly Fun Thing I’ll Never Do Again". You’ll meet a man who could play his contemporaries off the court whenever he wanted to, and you’ll wonder why he didn’t want to all the time.
Posted by David Free at 1:43 PM