The Sound of No Hands Clapping 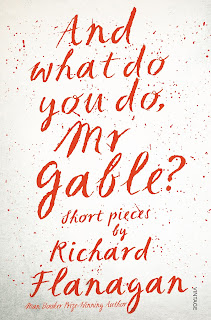 Originally published in the Australian Literary Review, October 2011
Nobody would deny that Richard Flanagan is a passionate writer. His new collection of non-fictional prose is full of fire and commitment, all right. But does he have the talent to convert passion into literature? This is the question about his work that won’t go away. Let's consider a typically cantankerous sentence from the present volume. Responding to critics who argue that Australian novelists should “write more about money”, Flanagan says this: “So much offensive idiocy and prescriptive stupidity has not been heard since the days the lecterns of Eastern Europe grew greasy with the nonsense of cultural commissars insisting on how only social realism adequately described socialist reality.”
Look at what passion does to Flanagan’s prose. His language overheats, but it refuses to get especially inventive or evocative. (By what process might one expect “nonsense” to deposit grease on a lectern?) Flanagan’s unfortunate lack of creative resources (wit, irony, pictorial imagination) means that his strong feelings have nowhere to go, except into the making of a crude overstatement that can only alienate an intelligent reader. To suggest that the plight of the contemporary Australian novelist is in any way comparable to the woes of a Soviet-era writer in Eastern Europe is obscene, as well as absurd. Indeed, the comparison is so inept that Flanagan destroys his own case: he accidentally reminds you that Australian novelists, when you look at their situation historically, don’t really have much to complain about at all. Flanagan has an anti-talent for rhetoric. When he cranks up his prose to convince you of something, he has an uncanny ability to make you sympathise with the opposite view, even if you didn’t before.
This tendency turns out, in the present volume, to be chronic. Flanagan has a habit that is surely a bad one in a non-fiction writer: he keeps failing to check whether what he is saying is true. Here he is kicking off an essay about war entitled “Lest We Forget”: