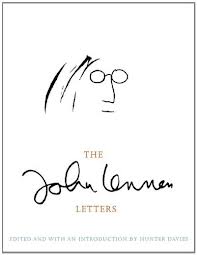 From the outside, The John Lennon Letters looks like a feast for Lennon buffs. The book is 400 pages long and as heavy as a paver. If Lennon really wrote this many letters, this isn’t merely an “international publishing event.” It might also be a significant and revealing contribution to cultural history.

Unfortunately, the Letters is less full of letters than you might think. Its editor, Hunter Davies, initially dreamed of discovering “large, hidden-away caches” of unknown Lennon correspondence. In the event, he unearthed only a handful of substantial letters. To fill the book up, Davies has, by his own admission, “rather expanded the definition of the word ‘letter’.” He’s expanded it, apparently, to include any piece of paper or cardboard that bears Lennon’s signature: shopping lists, memos to domestic staff, postcards to fans (“Dear Toli, Hi! Bye! Love, John”).

So this isn’t a collection of letters in the usual sense. To make up for that, the book is sumptuously designed. It’s beautiful to hold and look at. It even smells good. With a few exceptions, each letter or note is photographically reproduced, and flanked by a typed transcription of its contents. Davies provides generous chunks of background information between exhibits, so that the book almost qualifies as an illustrated biography.

The more revealing letters raise the usual question. How much about the private lives of our favourite artists do we really want to know? In Lennon’s case this question becomes especially pointed. Without doubt the man wrote some of the most sublime songs in pop history. But behind the scenes, the avatar of peace and love often went out of his way to be verbally cruel. Reading his letters, you need to keep Lennon’s virtues as an artist firmly in mind, perhaps by playing his records in the background. If you don’t, there’s a risk you’ll end up not liking him very much at all.

Lennon had a flair for acrimony. When the Beatles broke up, he and Paul had their famously bitter public feud. The Letters confirm one’s suspicion that the bitterness and aggression lay almost entirely on John’s side: he was the Mike Tyson to Paul’s startled Holyfield.

When Paul released his solo album Ram, John thought he heard some sly digs at himself and Yoko in some of the lyrics. He retaliated with the viciously unsubtle “How Do You Sleep?” (“Those freaks was right when they said you was dead ...”). After Paul voiced some relatively mild objections to that song in the pages of Melody Maker, Lennon replied with an open letter in which he proposed that it was typically dull of the “conservative” McCartney to take the lyrics “so literally.” Apparently they were meant to be funny. People were often misreading Lennon’s tone, but it never seemed to strike him that this might be his fault rather than theirs.

In his private letters to the McCartneys, John was even less inclined to be nice. Linda, writing to Lennon in 1971, upbraided him for quitting the Beatles without telling the press. John replied that others, including Paul, had persuaded him to stay silent. “So get that into your petty little perversion of a mind, Mrs McCartney – the cunts asked me to keep quiet about it.”

Adept at detecting insults, Lennon always had an alarmingly deep well of venom to draw on in reply. In 1971, the Beatles’ genial former producer, George Martin, made the mistake of short-changing John on some songwriting credits during an interview. Naturally, the man who urged the world to “imagine no possessions” was not about to let that slide.

“When people ask me questions about ‘What did George Martin really do for you?’” Lennon wrote to Martin, “I have only one answer, ‘What does he do now?’ … It’s not a put down, it’s the truth.” For good measure, Lennon took a swipe at the obscure band Martin was currently producing. “By the way, I hope Seatrain is a good substitute for the Beatles.”

Lennon knew how to wound. No doubt this talent was linked to his having been deeply wounded himself, back in his early childhood. Raised by his selfless Aunt Mimi, John always felt that his bohemian mother, Julia, had coldly abandoned him. He grew up thin-skinned but cocksure: a good combination for a rock-and-roller, but bad news for people who encountered him on an off day.

In 1971, a well-meaning fan sent him a pamphlet about Christianity. John shocked the poor guy by not only writing back, but by giving him both barrels. “Why don’t you Jesus Freaks get off people’s backs … Those who know do not speak. Those who speak do not know. Your peace of mind doesn’t show in your neurotic letter, son … Peace off!”

Naturally it didn’t occur to Lennon that the same critique, minus the word “Jesus”, was uncannily applicable to his own spiritual stances. Lennon was no stranger to proclaiming, very loudly, that he had all the answers to life's ultimate questions. But if his restless leaping from one mystical fad to another ever brought him peace of mind, it didn’t show.

In 1968, he declared that the key to “Absolute Bliss” lay in India, at the ashram of the Maharishi Mahesh Yogi. When the Maharishi proved to be human, Lennon took his revenge with a song: the White Album’s “Sexy Sadie.” “You made a fool of everyone …” As usual, Lennon’s blame radar pointed strictly outwards: he declined to explore the possibility that submitting himself to teachings of the bearded one had been a foolish act in the first place.

After that it was primal scream therapy. (“I think this is the last trip,” he wrote to Pete Townshend.) This gave Lennon pseudo-scientific licence to scream at his aging loved ones and then not quite apologise for it. “I seem to remember you being upset by my screaming at Mimi …?” he wrote to a cousin in 1975. “Well she and I are both well over that. I hope you are too.” Take it or leave it, mate.

On the artistic front, the screaming craze did give us the remarkable, howl-drenched “Mother.” But did meditation or primal yodelling change John’s personality one little bit? By the mid-seventies he’d done a lot of both, and he was still carrying a lot of rage. Estranged from Yoko, he drunkenly and violently disgraced himself in an L.A. nightclub. When the musician Todd Rundgren chipped him for that in an interview, Lennon again proved himself the master of the malevolent public retort. “Turd Runtgreen … I think that the real reason you’re mad at me is cause I didn’t know who you were at the Rainbow.”

Lennon finally found contentment via the least revolutionary of paths. He became a househusband in New York, with Yoko and their son Sean. At this point the letters mellow. There are cosy domestic memos and notes for the maid. “Milk (3 cartons.) Oranges. Grapenuts (not flakes) …” On the page after that, Lennon fires off a searing complaint against injustice and oppression – to his dry cleaner. “What is your excuse for turning my brand new white shirt yellow?”

In 1980 Lennon delivered the Double Fantasy album. “Starting Over,” “Beautiful Boy,” “Watching the Wheels” – the songs were mellowing too. As an artist, he was far from finished. Three weeks after the album’s release he was shot dead.

Lennon could be a charming and decent man, but his personal virtues rarely come across in his letters. In mere prose, he lacked the talent to access the less cranky aspects of his personality. He needed melody and lyrics to do that. Lennon was only human, but he was also the only human who wrote “Imagine”. That’s the thing to remember about him. Give him a guitar and he had the power to persuade you, for the length of a song, that anything was possible.