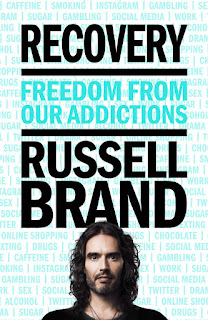 It is hard to dislike Russell Brand entirely. On the other hand, liking him more than a bit would probably be excessive. Not that an author’s likability ought to matter to a book reviewer. Many of the world's finest writers and thinkers were well known to have been jagweeds in their private lives. We are obliged to look beyond such considerations. We are obliged to distinguish the work from its creator.
The trouble with Russell Brand, however, is that he persistently goes out of his way to render this distinction meaningless. Everything he does is all about him, in the end – and in the beginning and the middle too. Whether he is calling for global revolution, or doing his jittery, artless version of stand-up comedy, or proclaiming that we need to keep an “open mind” about who really felled the twin towers, or interviewing some expert he can’t wait to interrupt or speak over the top of, Brand is always engaged in the same basic project – that of imposing his febrile, needy personality on whatever subject or medium is at hand.

This time around, the medium is a self-help book called Recovery. A picture of Brand’s face features prominently on the cover, as it does on many another Brand product. The eyes fix you with their familiar stare, half baffled, half petulant. He looks like a peeved messiah, or Che Guevara preparing to send back a plate of oysters. Above the photo looms his accidentally resonant name, in its jumbo font: the surname that means a product line, the forename that is a homonym for an inconsequential noise.

The subject of the book is addiction. The modern world, Brand believes, is a dangerously addictive place. Even if you are not technically an addict, you almost certainly have an unwanted dependency on something, such as chocolate, or your smartphone.

This means that Brand is in a position to help you, since – as you may have somehow failed to hear – he spent the bulk of his youth being addicted to just about everything: heroin, crack, alcohol, sex, junk food, pornography. Since 2002, however, Brand has been free of his major addictions, and has been hard at work kicking his minor ones.

He credits his recovery to the twelve-step abstinence method pioneered by Alcoholics Anonymous. His book is meant to tell you how the twelve steps can work for you, by telling you how they have worked for him. Of course you could always look up the twelve steps online for free, if you were so inclined. They're not hard to find. And reading them won't take you long: they only go on for around two hundred words. This means that Brand, after enumerating the twelve steps in his book, has a lot of room left over in which to talk about himself: an opportunity he seizes with frenzied gusto. Traditionally, self-help books are meant to be about you, the reader. This one is largely about the guy who wrote it. Once again, Brand has hijacked an existing form, smothering its etiquette and customs beneath the whims of his fevered ego.

You could argue that this is a legitimate move, from the practical angle if not the aesthetic one. After all, there is an important message at the heart of this book. And let's face it: allowing Brand to put his personal spin on it means that the message will reach far more readers than it would if contained in a book written by a mere specialist or trained professional. Whether Brand's readers will be able to plough through 280 pages of his hectically improvised prose is another question. But let it be said, for the moment, that Brand has some undoubted personal virtues that offer partial compensation for the way he writes. He cares deeply about his subject. He has obvious compassion for other addicts. And he is insanely honest. “The one thing I’ve always been pretty certain about is that this life is all about me,” he writes at one point. You could deduce as much by reading a page or two of his prose, but it's nice to hear him admit it flat-out. “Self-centredness,” he writes elsewhere, is “the core of my condition.”

Anyway, the twelve steps have proved so personally useful to Brand that he sees no earthly reason why the rest of humanity shouldn’t want to become ardent twelve-steppers too. After all, he says, these days everyone is an addict, of one kind or another. Therefore the steps can serve as a “universal” social tonic – even though, or perhaps because, performing them will commit us to a more or less ceaseless contemplation of the self, with no time left over for studying the world beyond it. Step Ten alone, Brand says, will involve us in “a daily, possibly constant process of instantiation of new ideals.”

You can see why a serious drunk or drug addict might be ready to volunteer for a future filled with the rigours of daily "instantiation". But surely it would be a bit excessive for a mild chocoholic, say, to sign up for the same draconian cure? Well, not according to Brand. And so a book that might have been a slim and pointed manual for people with real problems becomes a bloated spiritual guidebook for our whole ailing society. “I suggest,” says Brand, that the 12-step program “could be the genesis of a new way of being.”

Without apparent irony – or without nearly enough – Brand proceeds to reveal that he would like us to view him not just as a recovery guru, but as a “sage” and “prophet” too. Unfortunately, Brand is a non-starter as an intellectual. He is simply incapable of seeing the world realistically, with humility. He seems to have no sense of its size and complexity; he doesn't seem to grasp that many things in it – most things in it – have nothing to do with him. Except for a merciful late chapter describing the birth of his first child, the atmosphere of this whole book is suffocatingly Russell-centric.

As for religion, Brand’s position is as follows. He is too smart for vulgar monotheism: he sees right through all that. But he’s too smart for simple scepticism too. The way he sees it, all the big religions share a common message. And he feels that it's high time that somebody (guess who?) had the courage to salvage this precious message from the rubble of the world's collapsed or collapsing faiths. And the message is: “love is the answer.” Or, to put it a slightly different way: “But I know and you know (don’t you?) that there is beneath the shash of thought and the wrought ascent and bilious plunge of feeling, some code of which the Sufis sung (sic).” Wasn't Brand meant to have been a comedian, at some point in his career? What person with even a vestigial sense of humour would be caught dead writing a sentence like that?

Faced with a book like Brand's, the critic is obliged to engage in a familiar ritual. Again a celebrity non-writer has published a superfluous and disposable book. Again the reviewer is compelled to blow the whistle on it, so that order may be restored. But really it's a strange sort of order we have, when celebrity typists like Brand get paid immense sums of money to inform us that we live in a shallow culture. Not that Brand is wrong about that. We’re addicted to trivia, all right. But when he lists the many kinds of ephemera that we’re hooked on, he somehow forgets to mention books like this one, which deliver the quick sugar hit of a famous face on the cover, followed by the shameful realisation that you’ve been sucked in by the junk yet again.