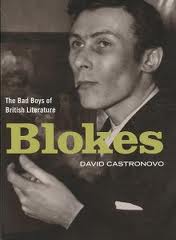 A review of Blokes: The Bad Boys of British Literature
By David Castronovo
Originally published in The Ember, August 2010
David Castronovo’s Blokes is a study of four more-or-less blokey post-war British (indeed English) writers: the poet Philip Larkin, the novelist Kingsley Amis, the playwright John Osborne, and the critic Kenneth Tynan. Castronovo is an American academic, and in some ways his American-ness – or at least his non-Britishness – shows. He is under the impression, for example, that “ratbags” is a singular term, like “jackanapes.” He also believes that Philip Larkin wrote a poem called “Sunny Penstatyn.” (The place is called Prestatyn.) And several times he uses the hideous epithet “cheesy” to denote general awfulness. It’s depressing to learn that even highbrow Americans have started using this crass term. Americans are entitled, I suppose, to invent an orange product that comes out of an aerosol can and call it cheese; but to proceed to coin a word suggesting that cheese is an inherently shitty substance is going a bit far. Those of us who enjoy the subtler varieties of the fermented curd must resist the internationalisation of this term at every opportunity. Has Castronovo never savoured a slice of barbecued haloumi, or carved himself a wedge of Brie? He is writing, remember, about a country in which the Ploughman’s Lunch is a justly celebrated staple.
But these are side issues. The main question is this: how well is Castronovo able to conceal, or transcend, the fact that he is an academic, writing an academic treatise? We know what books like this can be like. Amis himself, in Lucky Jim, cruelly nailed the properties of the publish-or-perish endeavour: the selection of the “strangely neglected” topic; and then the article itself, with its “niggling mindlessness, its funereal parade of yawn-inducing facts, the pseudo-light it [throws] upon non-problems.” I should say right away that Castronovo’s book isn’t as bad as that. On the whole it’s well written and judicious. Refreshingly, Castronovo doesn’t seek, at least not much, to arraign Amis and Larkin for their private misdeeds. And if there are places where his thesis about his subjects’ “blokishness” begins to feel a little artificial, for the most part he doesn’t try to stretch it too far. Mainly the book supplies a straight account of each man’s work, embedded in a sketch of his life and cultural habitat. In the cases of Amis, Osborne and Tynan, this approach yields readable results, although there are times – when you’re reading Castronovo’s brisk summaries of the plots of Amis’s novels, for example – when you wonder what you’re getting from Castronovo that you couldn’t be getting, in a much more entertaining form, from the books of the blokes themselves.
In the case of Larkin, though, Castronovo’s biographical approach has the effect of muffling, rather than enhancing, his understanding of the works. Since Larkin’s death, we’ve heard a lot more about Larkin’s bleak private life than we’ve heard about the work, and his reputation as a poet has suffered. The job of the sympathetic critic, right now, is to disinter the poems from the rubble of the Larkin “debate,” and remind people why Larkin was able to establish a reputation in the first place. Castronovo, on the face of it, is a sympathetic critic. But the thesis of his book obliges him to keep hammering the proposition that Larkin was a “bloke.” And there is far more evidence for this proposition in Larkin’s letters and life than there is in the poems. So Castronovo, depressingly, keeps the trend going: before we get to the poems, we must hear about the wartier aspects of Larkin’s biography. We get quotes from the letters: Larkin, some time around 1945, bitches about having to pay for dinner “WITHOUT BEING ALLOWED TO SHAG the woman afterwards AS A MATTER OF COURSE.” We’re told about affairs that “reveal him in all his blokish awfulness and honesty.” We even get the cynically inserted blade of a bracketed exclamation mark: one of Larkin’s girlfriends “would later remember that gentleness and consideration (!) were also mixed in with his self-absorption.”
With all this stuff fresh in our heads, our reading of a poem like “Church Going” is bound to be prejudiced. Here, in full, is Castronovo’s analysis of that poem:

A clueless modern Brit enters a church, removes his ‘cycle-clips in awkward reverence,’ walks around, and encounters a thousand years of Christendom. While inspecting a spiritual place that has never meant anything to him, he achieves his own recognition. Larkin makes his clumsiness and vague boredom ways of understanding. And there’s something ironically humorous about the ignorance and insensitivity. As the tourist lets the door ‘thud shut’ (all bluntness intended), we laugh at ‘there’s nothing going on’ and the weary phrase ‘Another church.’ The ‘holy end’ and the ‘unignorable silence, / Brewed God knows how long’ are rude and uncomprehending, but the language wakes us up. Plain bloke-speak leads somewhere important: in wondering what to look for, he discovers his own spiritual sense. What is to come when belief is ended, superstition has come and gone, and even disbelief has grown old? He has ‘no idea / What this accoutred frowsty barn is worth’ yet he is strangely pleased to be in it. Larkin’s honest doubter – someone who refers to the believer as a ‘Christmas addict’ or ‘ruin-bibber’ – is busy doubting himself. For someone ‘bored, uninformed,’ he’s very interested: the silence which existed for God knows how long gives pleasure. With an awkward, groping vocabulary, he blurts out his recognition: the church is a place where ‘someone will forever be surprising / A hunger in himself to be more serious.’ The wonderful alliteration makes the line epigrammatic, a piece of spiritual wisdom. It should also be said that the poem has travelled the distance from flippancy to seriousness. But without the blokish language (including church going, like movie going) the poem would be a dry meditation.

Apart from one clear misreading – the ruin-bibber isn’t a believer, but someone who scours derelict churches for antiques – this analysis isn’t outright wrong. But it’s subtly infected by the notion that Larkin was as “blunt” and inconsiderate in his poetry as he was, allegedly, in his life. “Rude”, “weary,” “clueless,” “insensitive”? Read “Church Going” with a cold eye, and see if those adjectives spring to mind. What is so “weary” about the phrase “another church”? Read in context, the phrase does nothing more than signify that the poet is in a church, and that he goes to churches often. To hear weariness in it, you need to be equipped with the preconception that Larkin was a serial whiner. Castronovo believes that he was, in both his life and his poetry. In fact, he thinks that Larkin rather overdid it: “Larkin, after all, won tremendous recognition for a small body of work, enjoyed such honors as an honorary degree from Oxford, went to Buckingham Palace for his CBE (with Monica [his girlfriend]). Yet in ‘Party Politics’ he writes ‘I never remember holding a full drink.’”
Well, Larkin did write that. But the rest of that poem (“What next? Ration the rest …?”) makes it reasonably clear that his drinks haven’t started off half-full: they’re abbreviated because he’s always taken an initial sip of them. So there is a heavy dose of self-deprecation, even whimsy, in Larkin’s complaint. On the whole Larkin’s grumblings were a lot more good-natured than Castronovo, and a lot of other critics, give him credit for.
The chapter on Larkin is the weakest part of the book, so in a sense it’s unfair to focus on it. But Castronovo’s readings of Larkin demonstrate the general hazards of the biographical approach. If you push that approach too far – if you forget that a piece of literature is at least partly an autonomous and refined thing – you will needlessly limit your understanding of the work. If Larkin criticism is to progress, it needs to get to grips with the paradox, which really isn’t all that hard to understand, that Larkin was a man who lived an ugly life but wrote beautiful poems.
Posted by David Free at 4:03 PM