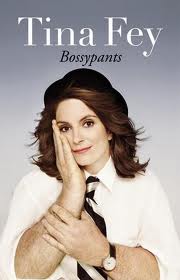 Originally published in The Weekend Australian, May 21-22, 2011
Tina Fey has been called the funniest woman in America. Until I read Bossypants, her disappointingly negligible new book, I’d probably have agreed. Fey’s 30 Rock is the sharpest sitcom on TV. It’s full of quotable, literary lines. Bossypants, alas, is not. It’s too rambling and loosely written to make you laugh; you suspect that Fey composed it with less care than she lavishes on the scripts of her show. And that seems significant. In an age when the best American TV writing strives for permanence, books like this one increasingly seem to have the status that American TV shows used to have. They're becoming so disposable that nobody really expects them to be anything else.
But let’s begin with Fey’s strengths. There may be no better practitioner of the one-liner in America today. Here she is on how it felt to grow up in the 1970s: “It was always ‘Day 27’ of something in Beirut”. And here’s what she said when she was impersonating Sarah Palin, and was called on to address the topic of gay marriage: “I believe marriage is meant to be a sacred institution between two unwilling teenagers.” (At the time, we should recall, Palin’s pregnant daughter had just celebrated a lightning engagement to her luckless inseminator.)
That’s how Fey sounds at her best: compact, venomous, bang on target. But you can’t construct a 270-page book entirely out of one-liners. Over the long haul, Fey turns out, inevitably, to be a less scintillating performer. Mostly her book is a mildly jocular memoir, sprinkled with some purely comic chapters that never really take fire. She declines to tell the “whole story” behind her famous scar, saying only what she’s already said in interviews: at the age of five, she was slashed across the face by a stranger. There’s some interesting stuff about the nuts and bolts of TV writing. There’s an excellent chapter about a calamitous luxury cruise.
All this is readable, occasionally moving, and better than average for a book of this kind. But that’s exactly the problem: this book reads like a somewhat better-than-average celebrity memoir, when Fey seemed more than qualified to give us a proper book, written by a real writer.
30 Rock is refreshing because it offers a wide-angled perspective on America’s cultural insanity. One had hoped that Fey's book would be like that too: cool, sceptical, above the American fray. Instead Fey embraces many of the trivial celebrity-culture priorities that her show so trenchantly lampoons. She has no quarrel, for example, with the Oprahesque assumption that the self, especially the outer surface of it, is an endlessly discussable topic. She tries to be ironical about getting manicures and posing for glamour shots, but she doesn’t find these things quite absurd enough to stop doing them. She seeks credit, and perhaps even deserves it, for having “thus far refused to get any Botox or plastic surgery.” But a culture in which that qualifies as a brave and radical act, roughly on a par with refusing treatment for an arrow through the neck, should get a far more comprehensive satirical bollocking than Fey gives it here. 30 Rock would give it one. But in Bossypants, Fey fatally personalises the big social questions. Defending her private “choices”, she sounds far too touchy to be funny.
Back in the 1970s, Woody Allen published three volumes of comic pieces that were ultimately collected as his Complete Prose. To measure Fey’s book against Allen’s is to realise how drastically the American mind has shrivelled over the intervening years. Allen’s range of reference was unapologetically wide. Dostoevsky, Kafka, Plato, Van Gogh, Yeats, Stravinsky, Gertrude Stein – many an Allen joke depended on your having at least a rough idea who such people were. When Fey drops an obscure name, it generally turns out to be some actor from a justly forgotten TV show. Larry Wilcox? Jon from CHiPs. Robert Wuhl? The guy from Arli$$. It’s moderately funny, once or twice, when a woman as smart as Fey conjures the name of some long-forgotten TV hack, or drops some gangsta catchphrase. But when she confines herself to the same tiny spectrum of American junk culture for the course of a whole book, you struggle for air.
When Fey does risk a lone literary allusion – her cruise-ship chapter is entitled “My Honeymoon, or A Supposedly Fun Thing I’ll Never Do Again Either” – she adds a clanging footnote that epitomises the book’s weaknesses: “If you get this reference to David Foster Wallace’s 1997 collection of essays, consider yourself a member of the cultural elite. Why do you hate your country and flag so much?!” Fey’s deft touch deserts her here, as it does in so many parts of the book. She lets anger propel her beyond irony and into mere sarcasm. But we should probably cut her some slack on this one. America’s fools and philistines want her down there in the trenches of the culture wars, with them. The temptation to take the odd brutal crack at them must be awfully hard to resist.
Fey got a six million dollar advance for this book. That is a fair whack. No doubt she felt obliged to deliver the kind of book that would earn the money back. But it isn’t much fun watching an intelligent writer pretend to be less smart than she really is. Writing for TV, Fey has never seemed to be in any doubt about what her audience wants. It wants her to write as sharply and dangerously as she possibly can. She doesn’t seem to think readers of this book will want the same thing. Reading Bossypants, you get a feeling you never get while watching 30 Rock: the feeling that you’re being written down to.
(Originally published in The Weekend Australian, May 21-22, 2011)
Posted by David Free at 3:03 PM