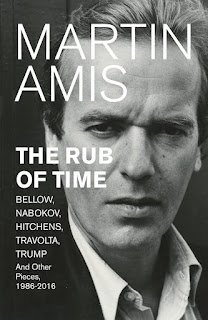 Originally published in The Weekend Australian, Nov. 20-21, 2017
Even if you were to take Martin Amis’s fiction off the table, you could still plausibly claim him as the Anglosphere’s most interesting living writer. Look at what he’s produced, in the various departments of non-fiction, just since the turn of the millennium. You have Experience (2000), the gravid memoir; The War Against Cliché (2001), that endlessly nourishing book of literary criticism; Koba the Dread (2002), his controversial monograph about Stalinism; and The Second Plane (2008), an indispensable collection of post-9/11 political pieces.

And now we have The Rub of Time, his strongest collection of non-fiction to date, a feast of a volume that brings together his hitherto uncollected essays, reportage, and reviews. All of Amis’s usual interests are here, along with some new ones. There are meditations on his favourite writers (Bellow, Nabokov, Larkin). There are pieces on sport and popular culture, including some wonderfully funny stuff on tennis. And there are bang up-to-date appraisals of American and British politics. Attacking these questions from the vantage point of his maturity, Amis confirms his status as one of literature’s great and exemplary all-rounders: always stylish, always deeply intelligent, always voraciously interested in the world around him.

Sprawling and various as it is, the new book keeps returning to two linked themes: masculinity and excess. And a good half of it zeroes in on the place where these themes achieve their most startling expression: America. None of this will surprise the long-term student of Amis’s fiction, which has been probing these connections since his breakthrough novel Money (1984). The narrator and protagonist of that book, the cashed-up philistine John Self, was addicted to the modern world. That meant he was addicted, above all, to America. Starting with Self, Amis’s characters have always been hopping on planes and flying to the United States. And Amis has always been flying there too. Finally, in 2012, he stopped flying back to his native Britain, and settled in Brooklyn, New York. And why not? “America,” he writes in the present book, echoing Henry James, “is more like a world than a country.” What better place for the international writer to base himself?

Amis has already published one collection of non-fiction about America: The Moronic Inferno (1986), whose resonant title he borrowed from his mentor Saul Bellow. The best pieces in the current book revisit the inferno, and find that it has grown no less moronic. The clinching essay, written at the height of last year’s election campaign, concerns Donald Trump: a man who embodies the inferno so thoroughly that he wears it as a hairstyle.

What is it about America, exactly, that keeps stoking the fires of Amis’s imagination? There is a clue, I would suggest, in the following passage from The Information (1995) – another novel whose central character takes a life-altering flight to the States, where he encounters, among other grotesques, a woman named Phyllis. “In person, Phyllis seemed to be the kind of American woman who had taken a couple of American ideas (niceness, warmth) and then turned up some dreadful dial, as if these qualities, like the yield of a hydrogen bomb, had no upper limit – the range had no top to it – and just went on getting bigger and bigger as you lashed them towards infinity.”

Lashed towards infinity: it could be the title of the present book, or of the next biography of Donald Trump. Amis is not an anti-American. Far from it. But he is old-school enough to assert that some things do have upper limits. Decorum, he is in the habit of saying, must be observed. Which means, of course, that the satirist in Amis positively loves it when decorum is violated, the more floridly the better. Hence his ongoing preoccupation with America – its dreadful crankings-up of the dial, its lust for the infinite.

The director of the Rough Sex series (now discontinued), who goes by the name of Khan Tusion, protests his innocence. ‘Regan Starr,’ Tusion claims, ‘categorically misstates what occurred.’


Like his late father, Amis is a connoisseur of language. He revels in the sobriquet of the maligned auteur, Khan Tusion; he instinctively knows that the surname must be isolated and repeated. And he knows that “misstates” is gold too: a quintessentially American piece of pedantry that makes Tusion sound like Mitt Romney on the campaign trail.

To a writer of Amis’s generation and type, the answer to that question is straightforward. He is a moralist, a satirist, a cultural critic; his job is to register what’s wrong with society. Judging people, therefore, is his bread and butter. And he’s still at it. Evidently he missed the meeting at which it was decided that judging people is no longer on. Also, he's still cracking jokes – another problematic activity, given that humour, as Amis has conceded himself, always entails an assertion of superiority.

Pushing his luck in two ways, Amis is always getting himself into public scrapes. There is a piece in this book about Jeremy Corbyn, leader of the British Labour Party. In it, Amis observes, or claims, that Corbyn is “undereducated.” When the piece first appeared in print, that word earned Amis a brief spell in Britain’s naughty corner. Columns got written in which he was accused of snobbery, elitism, and other crimes against advanced mores.

Writers of such columns, however, will always be at least one move behind Amis. He already knows what they think, and what they will say; his prose is already a reaction against their strictures. One of his key virtues as a writer is the seriousness with which he takes his vocational obligations. He knows that our culture is full of people who want to shrink the domain of the sayable. And he knows that one of the writer’s duties is to push back the other way: to establish what can still be said, if necessary by saying what can’t be said. If writers like Amis don’t resist the incoming tide of old and new taboos, who else is going to?

Alas, the question has already been answered, at least in America. Suddenly the world has Donald Trump. After the cult of compulsory respect, we have the cult of in-your-face boorishness. Amis deplores both tendencies with equal staunchness, without having to vary his principles to do so. His critics, on the other hand, are required to keep two sets of books here. When Amis went on record denouncing Trump’s “cornily neon-lit vulgarity,” few newspaper columnists, to my knowledge, accused him of snobbery. Suddenly they were on his side. They saw the point of elitism after all.

Amis, the man who invented John Self, is uniquely qualified to write about Trump. Unsurprisingly, his take on Trump begins with the man’s verbal output, before graduating to a more general indictment. Reviewing Trump’s latest book, Amis finds that his sentences “lack the ingredient known as content.” Nevertheless, they do convey a certain attitude. And that attitude clearly has its fans. Among other things, what Trump’s election tells Amis “is that roughly 50 percent of Americans hanker for a political contender who … knows nothing at all about politics.”

What is revolutionary about Trump, to put it another way, is not his ignorance, but the way he has converted it into a selling point. George W. Bush, when he stumbled over the delivery of a simple homily, at least had the decency to look embarrassed. So did Dan Quayle when he got caught misspelling the word "potato". John Self, too, had a vestigial sense of shame: he knew that all his cash did not make up for his lack of culture. Then again, Self was a fictional character; he was Amis’s fantasy of what a rich yobbo ought to feel, when his conscience finally kicked in.

Trump, on the other hand, is real. If others won’t hold him to the demands of decorum, why on earth should he impose them on himself? Like the pornographers of the San Fernando Valley, like the city of Las Vegas, Trump has dispensed with shame. He has proved that an American can now go all the way without it. This is his fundamental breakthrough.

One of the most resounding passages in Amis’s book occurs in an out-of-the-way place, during a brief chapter in which the author responds to questions from readers of Britain’s Independent newspaper. “Why are you such a snob?” one reader asks. After replying, first of all, that he isn't a snob, at least in the class sense, Amis works up to this:

On the other hand, I think snobbery is due for a bit of a comeback. But not the old shite to do with ‘class’. ‘There is a universal eligibility to be noble,’ said Bellow rousingly. There is clearly a universal eligibility to be rational and literate. Sometimes snobbery is forced upon you. So let’s have a period of exaggerated respect for reason; and let’s look down on people who use language without respecting it. Liars and hypocrites and demagogues, of course, but also their fellow travellers in verbal cynicism, inertia, and sloth.


Startlingly, Martin Amis is 68 years old now. The former enfant terrible is now a grand-père terrible. But he is still out there on the cutting edge of public speech. Reading this book, I kept marvelling at what a committed writer Amis is. Superficially this seems an odd word for him, since he has never been committed to any particular partisan stance. What he is committed to is writing itself. He believes that even the shortest newspaper piece must be written with all his formidable resources. He is committed to his role as the autonomous, secular truth-teller, the equal-opportunity offender who answers to nobody except himself and his readers. He still seems to think that writing can change the world. It’s a good thing that he’s currently in career-best form. We are in no danger of ceasing to need him.