A sceptical look at the Miles Franklin shortlist for 2009
Once in a while, a literary prize gets awarded to the most talented writer in the field. Admittedly this would happen a lot more often if the judges of such awards simply drew the prize-winner’s name out of a hat. The Nobel Committee, even if it occasionally pulled out the name of the hat-maker by mistake, would still obtain less bizarre results using the hat method than it does by applying its literary judgement. But still, when a literary award is given to the right writer for the right reason, you get a dim reminder of why such prizes were considered a good idea in the first place. When this year’s Miles Franklin award went to Tim Winton’s Breath, the judging panel got it right. I can vouch for this, a little haggardly. I have spent the last month reading and re-reading the five novels on the shortlist, in an attempt to measure the health of Australian fiction. My findings? At its best, in the hands of a Winton, our fiction is in beautiful shape. At its second-best, it’s encouraging but not first rate. At its fifth-best, it doesn’t even achieve mediocrity.

Great toothbrush, pity about the novel

On the rise of the online moron

How good is the average customer review on Amazon, and what does its quality tell us about the health of Western civilization? Or, to ask a less boring version of the same question, how bad is the average below-average review on Amazon, and exactly how fucked are we? Below, selected entirely not at random, is a customer review from the Amazon page devoted to Lucky Jim. The review is entitled “Time Have Changed My Perception.” Feel free to insert your own sics:
Years ago, when I had the first oportunity to read this book, it seemed to be real fun, while today it is just description of general problems of academic enviroment, it looks that nothing have realy change or will change. The stagnation of academia is a pemanent dilema: today teachings are the absolite truths, defended by the old guards.
Reading this, I had a brief dilemma of my own ... [read more]
Posted by David Free at 4:43 PM

The shadow of barbarism

Halfway through this new collection of essays, in a piece about A.D. Hope, Clive James finds himself obliged to deal with an academic who has attempted to make sense of Hope’s notebooks using a high-falutin theoretical concept known as the “rhizome”. Here is part of James’s rejoinder:


The word “rhizome” has an affinitive similarity to the word “rissole”, the classic Australian term, drawn from the culinary arts, for something being reduced to a wreck. (Used as a noun, the word “rissole” denotes a kind of proto-hamburger, but used as a verb—as in “Strewth, we’ve rissoled the Holden”—the same word means that the machinery has ceased to work.)
As excellent as this sort of thing is, we should always remember that the funny stuff isn’t what Clive James does instead of the serious stuff. It’s what he does on top of the serious stuff ... [read more]
Posted by David Free at 4:48 PM

A few weeks back I found myself faced with a revolting question of modern etiquette. I was staying as a guest in somebody else’s house, at a time when my hosts happened to be looking after a third party’s dog. My hosts were out, leaving me in sole charge of the dog. The dog seized the opportunity to defecate, horrifyingly, on the key stretch of floor between the couch and the big-screen TV. The mess looked like something Jackson Pollock might have produced if he’d ever elected to work in the medium of putrid gravy. It was so extensive, and so centrally located, that there was no way I could plausibly pretend not to have seen it. So I had two options. I could clean it up; or I could exercise my right, as a non-dog person of over thirty years’ standing, to wait for an avowed dog-lover to get back home and put his passion into practice.
I cleaned it up.
Let’s say I’d decided not to. Let’s say I’d just left it there, and tried to get on with my doomed ambition to live a life dedicated to a non-involvement with dogshit ... [read more]
Posted by David Free at 4:42 PM

Email ThisBlogThis!Share to TwitterShare to FacebookShare to Pinterest
Labels: dogs 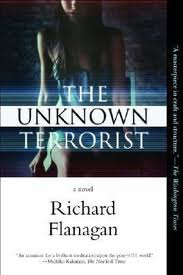 Not long ago, during a TV documentary about the writer Richard Flanagan, no less a literary pundit than Baz Luhrmann proclaimed Flanagan "the Australian Hemingway." These days, of course, it's quite permissible to go around passing such judgements without necessarily having read any actual books by either party -- and indeed it emerged, as Baz fleshed the comparison out, that what he mainly had in mind was the fact that both guys were quite keen on the outdoors. But he did, I think, throw in a token reference to the excellence of Flanagan's prose after that.

So how sound is Baz Luhrmann’s literary taste?  Here, free from the Web, is the overture to Richard Flanagan's 2006 novel, The Unknown Terrorist:

The idea that love is not enough is a particularly painful one. In the face of its truth, humanity has for centuries tried to discover in itself evidence that love is the greatest force on earth ... [read more]
Posted by David Free at 7:54 PM

On about day three of this year’s Byron Bay Blues Festival, I saw the guy with the world’s oddest job. He was part of a zydeco band. He wore a metal vest that looked a lot like Ned Kelly’s, although it was made of a shinier and less hefty element, possibly aluminium. The lower part of it was corrugated, so that from certain angles the guy appeared to be wearing a giant strap-on cheese-grater. His job was to dance around in front of a nipple-high microphone while hitting and stroking himself with a pair of wire brushes and generally looking like he was having a hell of a lot of fun. Looking like you’re having fun while listening to a piece of zydeco music for the thousandth time can’t be easy, but grater-boy did a pretty good job of it.
This is the beauty of the Bluesfest, which has just turned twenty. Part freak show, part musical cornucopia, part crash-course in things you never knew existed, it lets you stick your head in on a lot of stuff you wouldn’t otherwise get to see. Sometimes you stick your head back out again pretty fast. But now and then you’ll stumble in on a musician so brilliant – a Sonny Landreth, a Jon Cleary – that you’ll wonder how on earth you’ve managed to get through your life without having heard of him. The festival has six performance tents these days, going more or less simultaneously. If you can’t find something diverting in at least one of them, you’ve probably come to the wrong event. Even if you have, you can always repair to the food tent, where you can get an organic donut the size of a steering wheel, a crêpe served with authentic French insolence, or a Mayan hot chocolate hand-made by an actual Mayan out of small brown beans, at a pace that might well explain why Mayan civilization collapsed in the first place: maybe they all perished of thirst while waiting for their mothers to finish making their beverages ... [read more]
Posted by David Free at 4:47 PM