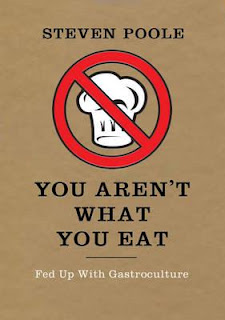 “Western industrial civilization,” says the British critic Steven Poole, “is eating itself stupid.” Poole’s recent  polemic against food culture, You Aren’t What You Eat, has had a sympathetic reception. Apparently Poole isn’t the only person who’s had a gutful of the food craze. Indeed, putting the boot into foodies is rapidly becoming a craze in its own right. Over Christmas, the novelist Will Self chimed in with an article urging Britons to make a New Year’s resolution to “throw up our very obsession with food itself.” Foodies have had a good run for a while now. But one detects signs that the great feast might be coming to an end. The critics are circling the table like waiters who want you gone. They’re clearing away chairs with increasing impertinence. One senses it might be time to call for the bill.


So far, Poole’s book stands as the leading work of the anti-food backlash. It is brisk, well-written, and entertaining. It’s also, I think, mostly out of order. Of course, a polemicist is not obliged to be even-handed: only provocative and lively. Poole is certainly both of those things. But one is entitled to disagree with his findings ... [read more]
Posted by David Free at 2:51 PM