500 Words on My Favourite Book

First published in The Weekend Australian, circa 2011 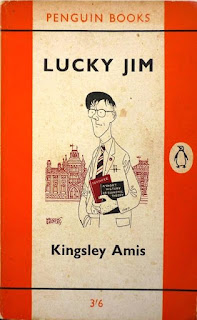 I must have been about eighteen when I first opened my parents’ copy of Lucky Jim. Physically it didn’t promise much. It was a liver-spotted Penguin from the 50s or early 60s. Much as I wanted to be the kind of guy who read orange Penguins, I was grimly aware that getting through one could be hard work. (To this day I maintain that Lady Chatterley’s Lover, sodomy or no sodomy, is a surprisingly uncompelling book.)
But on the second page of Lucky Jim I got collared by this description of two men crossing a lawn: “To look at, but not only to look at, they resembled some kind of variety act …” But not only to look at. What an exhilarating thing to do to a sentence. Literature had never sounded like that before. Amis was right there in the book with you, twisting his sentences like trick balloons.
One member of the variety act is the book’s hero, Jim Dixon, a junior lecturer at a provincial British university. The other is his boss, Professor Welch, one of the great comic antagonists in fiction. Dixon has five weeks to convince Welch to keep him on the faculty. “Until then he must try to make Welch like him, and one way of doing that was, he supposed, to be present and conscious while Welch talked …”
Amis was a master of arranging familiar words into startlingly fresh patterns. Evelyn Waugh, who preceded Amis as king of the comic novel, wrote about absurdly heightened characters and situations in elegantly deadpan prose. Lucky Jim does the reverse. Its events are quotidian; most of its laughs are generated by Amis’s unflaggingly audacious way with words. When Dixon wakes up with the gravest hangover in literature since Cassio’s, his symptoms are evoked in a paragraph-long extravaganza of richly metaphorical prose, culminating in one of the funniest sentences ever written: “His mouth had been used as a latrine by some small creature of the night, and then as its mausoleum.”
Notice how Amis’s word ordering maximises the comic effect. Latrine is funny, and the small creature of the night is funnier still. But it’s mausoleum, thrown in almost casually at the end, that makes the sentence crack like a whip. In a few respects Lucky Jim shows its age. When Dixon derides olive oil as “peasants’ butter-substitute”, we laugh in a way Amis didn’t bargain for. He really backed the wrong horse there. As for Dixon’s sexual politics: “the feminine manoeuvre of using an innocent bystander as whipping-boy was one he’d learned to recognise and dislike.” What on earth was Amis getting at there? Speaking as an enlightened modern male, I wish to state that I have absolutely no idea what he was on about.
These days I try not to revisit Lucky Jim too often. The novelist in me (he’s still in there, the stubborn bastard, even though his work remains so obscure that he makes Baron Corvo look like Justin Bieber) has grown wary of Amis's contagious cadences. His high-wire prose can be dangerously seductive. I could do that, you begin to think …
But not even Amis himself could sustain the magic forever. Lucky Jim was his first novel, and he never wrote another one to match it. Moreover, biographical evidence suggests that he become a decreasingly pleasant person as he aged. But we wouldn’t know or care about his private conduct if he hadn’t made himself famous, as a young man, by writing the funniest novel of the 20th century.
Posted by David Free at 3:37 PM