On Michael Caine's The Elephant to Hollywood 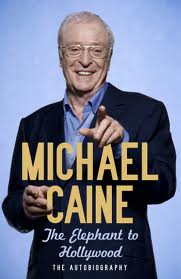 There is a revealing scene in Michael Caine’s new autobiography. Caine is at a lavish Oscar party, sitting next to the socialite Arianna Huffington. As the ceremony plays live on a big screen, Caine gives Huffington his “uninhibited” views about the winners. After a while, he asks her why she keeps fiddling with her BlackBerry. She tells him she’s transmitting a live blog of the proceedings. Caine is horrified: he fears she’s been telling the world what he really thinks about his peers.
It turns out that she hasn’t. And Caine, narrating the incident, is not about to tell us, either. He will divulge his real opinions, for free, to a quasi-celebrity with the table manners of an eight-year-old. But it doesn’t strike him that an autobiography might be an appropriate place to speak his mind. And who can blame him? Nobody expects full candour from books like this. Celebrity autobiographers are celebrities first and autobiographers second. The image must be preserved.
Caine’s autobiography never threatens these conventions, but it’s an unusually good book of its kind. For one thing, Caine genuinely seems to have written it himself. If he didn’t, it was ghosted by a master impressionist. For instance, Caine writes that he used to be “a bit of a jack-the-lad.” Try not to hear Caine’s voice saying that, genially withholding the consonants. Maybe some of Caine’s non-Cockney readers will be puzzled, even alarmed, by such locutions as “I opened my mouth to give the thief a bollocking.” But his lingo gives the book charm.
Caine was born in a London slum called the Elephant and Castle: hence the first part of the book’s title. His unpromising real name was Maurice Micklewhite. A congenital disease gave him permanently swollen eyelids. Then he got rickets from malnutrition. During the blitz, German bombs rained perilously close to his home.
They don’t self-make them like Michael Caine any more. After a near-fatal stint of national service in Korea, he patiently built his career. His early struggles are evocatively described. But let’s be honest: in books like this, it’s the part after the struggle that really interests us. What’s Hollywood really like, assuming it’s really like anything?
Inevitably, Caine’s most vivid impressions of Hollywood come from the late 1960s, when he was first making it there. On the subject of his more recent films, he can’t always rustle up much narrative verve. “I played Nicole Kidman’s father in Bewitched and then went on to play Nicolas Cage’s father in The Weather Man. Neither movie was a big hit …” And that’s pretty much all we hear about both films, and both Nics.
Caine has better fun with his inability to ride horses – a recurrent theme. After early fiascos, he instructs a film company to provide him with a docile mare. Instead he gets a large-testicled steed named Fury. Fury bolts, with Caine on top of him: “We were eventually brought to a screaming halt (it was me doing the screaming).”
Improbably, Caine doesn’t seem to have run across a famous actor he doesn’t like – although he does call Joaquin Phoenix “somewhat strange.” You shudder to imagine what this might mean, because Caine, when it comes to his fellow stars, seems oddly tolerant of aberrant behaviour. His stories about his icon buddies almost always make the icons sound kind of appalling. Frank Sinatra, for example, was a “great friend”, but “everything was on his terms … there was no equal partnership.”
Similarly, he considers Sylvester Stallone an old mate, but recalls an incident when Sly deliberately kept an entire film set waiting for three hours. Who’d want to be friends with someone like that?
There may be a clue in a story Caine tells about himself and Jack Nicholson. The two are overdue on set, and Caine starts to run. Nicholson says: “Don’t run, Michael. They’ll know it’s us who are late.”
Like most Hollywood maxims, this is clever, but it embodies a monstrous ethical code. You half-expect the no-nonsense Caine to realise this, and give Jack an outraged bollocking on behalf of the common man. Instead, he embraces the Nicholson creed as his own: he hasn’t hurried to a set since. So Caine is a bit less like us than we might hope, and a bit more like Jack and Sly.
Still, Caine has stayed remarkably sane, considering the ego-deforming pressures of movie-star existence. His book hints at how weirdly hollow that existence can be. Off set, there is constant recognition. On set, there is boredom, “hanging about,” and – in more exotic locations – diarrhoea. Nor does Caine try to conceal – how could he? – that sometimes it’s only about the money. “You get paid as much for a bad film,” he says, “as you do for a good one.” When he won the Oscar for Hannah and Her Sisters, he couldn’t accept it in person: he was in the Caribbean filming Jaws 4.
Despite having made over a hundred films, Caine runs out of things to say about them well before the book is done. Maybe, you feel, there’s just not that much to report. The last fifty pages feature a lot of repetition and padding. Finally Caine is reduced to imparting several pages’ worth of cooking tips, including his recipe for toast.
Reading Caine is like watching him. You can’t dislike him. He’s the right man to confront us with the deflating realities of his trade. His second Oscar was for The Cider House Rules. He played Charlize Theron’s obstetrician – which sounds like a promising role. But when Charlize turned up for the big examination scene, and placed a foot in either stirrup, she proved to be wearing a pair of hideous male Y-fronts.
(Originally published in The Weekend Australian, November 13-14, 2010)
Posted by David Free at 4:21 PM