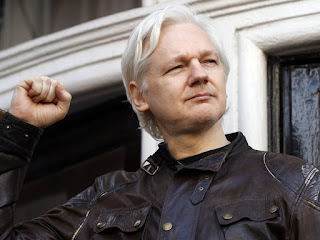 Andrew O’Hagan’s new book (The Secret Life, Faber & Faber) is a triptych of long essays, originally published in the London Review of Books, about personality in the age of the Internet. Two of O’Hagan’s three subjects are Australians. The first of these is Julian Assange, who, back in 2011, enlisted O’Hagan to serve as the ghost-writer of an ill-fated autobiography. The second is the computer scientist Craig Wright, who last year laid claim to being the shadowy Satoshi Nakamoto, inventor of the online currency bitcoin.
O’Hagan’s essays are unified not just by their subject matter, but by the high level of intelligence and sympathy with which their author probes his hyper-modern themes. There are many ways in which the Internet threatens to make us less human, and more stupid. The online world is coarse and binary; and its baseness seems to have inspired O’Hagan to write a set of meditations that are especially rich in old-school literary virtues. The Assange piece, in particular, is a masterpiece of nuanced ethical engagement – and of devastating character analysis.
O’Hagan’s history with Julian Assange began when the British publisher Canongate “bought, for £600,000, a memoir by the WikiLeaks founder.” In proper post-modern fashion, this “memoir” did not exist at the time. The idea was that Assange, having received his advance, would write such a book in the extremely near future. Or rather: that O’Hagan would write the book, with input and assistance from Assange. For months, O’Hagan made valiant efforts to involve Assange in the writing process. Increasingly it became clear that the soi-disant autobiographer had no intention of pitching in. In the end, O’Hagan produced a draft that Assange refused to sign off on. The publishers released it anyway, under the title Julian Assange: the Unauthorised Autobiography.
Assange didn’t like that. And then, after publishing the book, O’Hagan wrote his not-very-flattering account of the way Assange had conducted himself during its composition. Assange must have liked that even less. It turns out that Assange made a grave mistake, when he invited the astute and sceptical O’Hagan into his orbit. And this mistake said a lot about him. It was, O’Hagan argues, a manifestation of Assange’s chronic tendency to forget that other people have minds of their own. “He thought I was his creature and he forgot what a writer is, someone with a tendency to write things down and perhaps seek the truth and aim for transparency.”
Of course, Assange himself claims to be a big fan of truth and transparency. But he and O’Hagan have radically different ideas about what these words mean. According to Assange, truth is synonymous with data, and transparency is something you demand from institutions. And such transparency must be total and unconditional, which means it is only fair to access and publicise institutional data by machine, in bulk, with minimal human involvement. Hence the WikiLeakean preference for the vast and unedited electronic information dump. Even Edward Snowden, one of the great leakers of our time, has chipped WikiLeaks for its “hostility to even modest curation.”
Assange thinks big. He is, says O’Hagan, “not a details guy.” He has a few simple and unbendable beliefs, and he prosecutes them with a puritan’s zeal. He loves “the big picture … but not the fine print.” For O’Hagan, novelist and man of letters, things are the other way around: maybe there is a big picture, but it can’t be reached except by way of the fine print – the specific observation, the quoted piece of dialogue.
Another reviewer of O'Hagan's book has said that it deals with “slippery” characters. But slippery isn’t quite the word for Assange; and maybe character isn't the right word either. Groping through the smog of the man's rhetoric, O’Hagan sometimes seems to wonder if there’s any character behind it at all. At one point, Assange’s agent assures O’Hagan that Assange, despite appearances, really does want his memoir to happen. O’Hagan’s exasperated reply is instructive:

“And what does that mean, ‘I want a book’? He wants a book by not allowing it to be written? By not doing the work? By not committing himself to the interviews or liking what emerges from them? In what sense does he want a book?”

Words, O’Hagan insists, must have meaning; claims must have content. This isn’t just a linguistic point. It is the very basis of ethics: in the end, we must be judged by what we do, not what we say. Assange, the big-picture man, seems to think that having high ideals exempts you from having to behave with personal integrity. A lot of starry-eyed revolutionaries have thought that way through history; and their revolutions have had an uncanny habit of turning sour. As a young hacker, Assange's handle was “splendide mendax” – noble liar. As an adult, he “has a notion,” according to O’Hagan, “that WikiLeaks floats above other organisations and their rules.”
If we take the view that morality begins at home, Assange begins to look like a very iffy hero for our times. Like other Assange watchers, O'Hagan finds himself repelled by the visionary’s table manners. He eats with his hands. He licks his plate. He lets other people make his meals, and – far from washing the dishes – never so much as takes his dirty plate to the sink. This, O’Hagan concedes, “doesn’t make him Josef Mengele.” Still: “I found his egotism at the dinner table to be a form of madness more striking than anything he said.” Again, the local detail points us the wider ethical question. If we all gave ourselves permission to behave like that, what would the world be like?
Early in his career, Assange was fond of quoting a maxim of Oscar Wilde’s: give a man a mask and he will tell you the truth. WikiLeaks, whose website uses technology that conceals the identities of its informants under a veil of random noise, is ready to proceed on the assumption that Wilde was right. But was he? Spend ten minutes online and you start to wonder if Wilde’s epigram doesn’t need some serious tweaking. Give people a mask and they will behave abysmally.
WikiLeaks has a mixed record in the moral field. On the credit side of the ledger, more or less, you have the story of Chelsea Manning, who divulged American military secrets to the site. Manning can just about be called a “whistleblower” in the classic and honourable sense. She saw things that concerned her; she leaked them, although she leaked mountains of collateral data at the same time; although she didn’t precisely step forward to identify herself as the leak’s author, she knew the risk of exposure was high; and she suffered the consequences when they came.
Compare that with WikiLeaks’ latest contribution to history: the publication, during the American election campaign, of the internal emails of the Democratic National Committee. That was not a leak but a hack, whose object wasn’t to ventilate and reform the processes of American democracy but to subvert and corrupt them – to sway the election in favour of a man with a professed contempt for the nation’s democratic institutions, its free press, and indeed for truth itself.
So who was the masked perpetrator of that hack? The FBI, CIA and NSA have unanimously declared that it was Russia. Against this, we have Assange’s personal assurance that it wasn’t. But as O’Hagan is only the latest writer to demonstrate, Assange has by now wholly frittered away his right to be taken at his word about anything. He claims to be a friend to America and its institutions. But in practice he seems to be out there with Putin and Trump, trying to knock down those institutions with a wrecking ball. There was a time when Assange could plausibly assert that his goal was to improve America’s imperfect democracy. But the American landscape has changed: these days, imperfect democracy is beginning to look pretty good, considering the Trumpean alternative, which has the feel of a ghastly reality show that can’t be switched off. These are the alternatives currently on offer in the real world. Which of them would Assange prefer? If he would prefer the former, he's got a funny way of showing it. But for some reason the radical mind has a horror of impurity and imperfection and compromise, and likes chaos much better.
It would be misleading to convey the impression that O’Hagan’s essay on Assange is a hatchet job. Like the book’s other pieces, it is rooted in a desire to understand. Indeed its overall effect is poignant, because it demonstrates that Assange is his own worst enemy. He seems constitutionally incapable of keeping a friend. The great whistleblower trails behind himself a growing cohort of former colleagues and sympathisers who have ultimately felt compelled to blow the whistle on him. This cohort now includes O’Hagan. “The extent of Julian’s lying,” he writes, “convinced me that he is probably a little mad, sad and bad.” In the tribal world of the Internet, this will be taken as proof that O’Hagan is an “enemy” of Assange, who has set out to smear him. But let us recall that this is a book, not a tweet. In books, context still matters, and so does language. In a book, as in the more civilised spheres of real life, “convinced” isn’t something you start off being; it’s something you become, after absorbing the little details and seeing what they add up to.
Posted by David Free at 7:39 PM